Help for a beginner: leveling up military knowledge for guards and robbers from scratch.

Wandering around the city square and enjoying a warm Sunday evening, your obedient servant heard some guys discussing the topic of security / robbery "from scratch" and I immediately remembered one story.

A married couple lived in a large two-story house. Every time, for forty years, the wife asked her husband before going to bed to go down from the bedroom on the second floor to the first and check whether the front door was locked. She was so afraid of thieves that at the slightest extraneous sound she constantly asked her beloved to look "if there was anyone there . "

And then, one night, a woman heard a small rustle in the kitchen. Waking up her husband, she asked him to check if anyone was there. Slowly, out of habit, quietly shuffling his slippers, the old man went downstairs. Turning on the light in the kitchen, he saw a thief who rushed to run away through the open window .

- Wait! Please don't run away. You can take whatever you want from our house, only I have one request, - the old man's voice trembled a little with excitement. The robber stopped and turned around in surprise.

“I want to introduce you to my wife, she has been waiting for you for forty years!”

I really don’t want to rewrite the rules in blocks, but for beginners, I’ll just outline the most important stages in leveling the military craft.

For a quick "collection" of gold, you can put on the skin of a robber. Oddly enough, but almost all juniors start from a brothel, feeling the patronage of the Old Rat.

1. An attempt to rob castles is considered the most rational step, since with a successful raid, this gives the maximum increase in criminal authority, the purpose of which is to increase the number of robberies per day to the maximum possible five. The probability of finding a serious guard with a small or minimum possible treasury is very small. The chances of a successful robbery (BSHiP) without noise and dust, even at the initial stages, are very good.

It's okay if they beat you up and put you in the basement - whoever doesn't take risks doesn't drink kvass. Therefore, brass knuckles are optimally suitable for the penniless, the rest can use a saber. Do not forget to increase combat skills in parallel with the growth of OT (military knowledge). First, you should take those skills for which there is enough OT, and as soon as they accumulate more than 3000, reset them and get the Ninja skill . The rest of the skills that were "forgotten" when increasing the OT - do not forget to install again, because. they give a good advantage over those who forget. Or lazy. 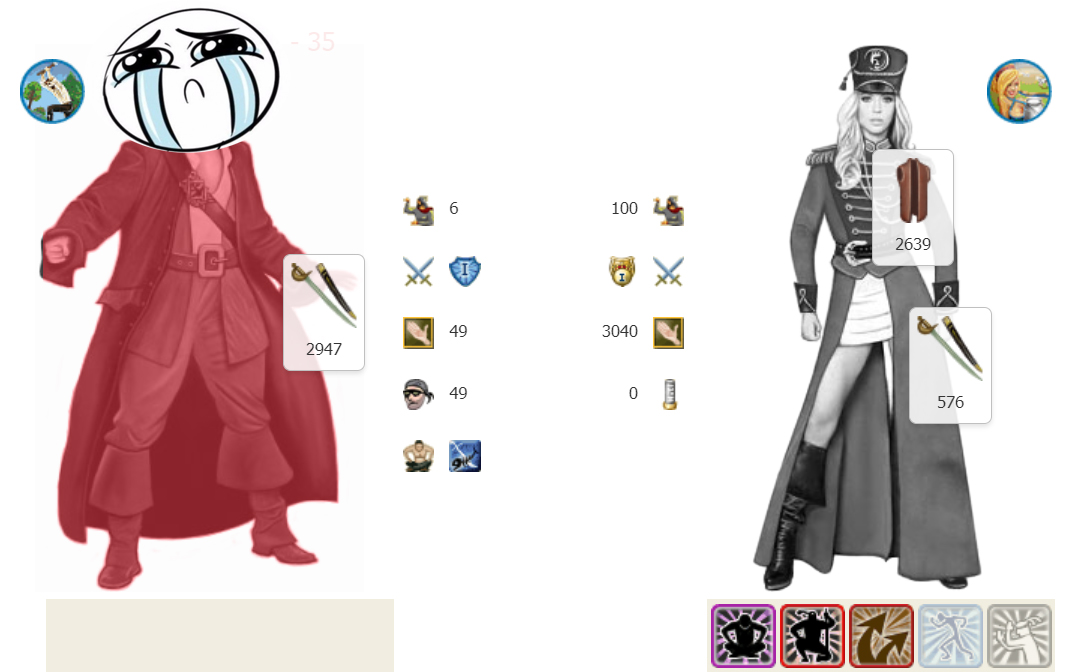 2. Communication with players, owners of AE (the most effective are cities). How can a null clone "take over the city" by itself? By oneself? Very easy, but by directly agreeing with the owner of a large AE (for a certain amount of gold and the correct submission of a request to "surrender" the city, especially since there are not so many of them to get confused) and receive +1000 KA for one attack and possibly even daily. Many will begin to speak out that some of the oligarchs will bother with the dismissal / hiring of security (up to 50 clones) and waste their precious time, but such a development model has the right to life.

3. The use of various jewelry "trinkets", wearing clothes of one's status and gender, and maximum participation in combat tournaments. For example, the "Ring of the Great Warrior" gives an additional passive growth of almost 11k fireproof OTs during the year, and you can equip eight of them at once! In addition to the rings, you can purchase the Chain , and visit the Temple Complex daily - so the clone will soon become a seasoned fighter!

4. If it is possible to spend a little money, it is obligatory to study the skill "First Aid" or "Last Chance" (requires the education of a surgeon), also pumping in megaliths and the accumulation of intention in the castle (better with social programs). Many people underestimate spending 5 gold, but with a good initiative (more than one unit than the enemy’s is enough) plus the “Last Chance” skill gives a good advantage in dealing more than just the last blow.

For those who do not want to rob for moral reasons (or just laziness), you can start with protection. Especially those clones who have AE (the "clone consciousness" will not allow them to rob), and those who do not have buildings - they can also start their career in protection. In this case, a good alternative to the KA would be getting a military rank, which, depending on the "stars on the shoulder straps", gives an increase in the already having OT from 1 to 10%, but only for the duration of the battle. I would not recommend wearing a diamond set, but if the jackpot is very high, then it makes sense to take a chance.

What does security provide? Guard gives an increase in OT due to dousing with pearls. If you still have nothing to increase, then there is another interesting "gadget" - these are artifacts that you can put on yourself at once in the amount of 4 pieces for a month: Magic cocked hat, Magic warrior's phallus, Magic warrior's cloak, Magic marshal's baton . The increase in OT exponentially - isn't it a fairy tale? There are disadvantages: the knowledge gained as a result of wearing artifacts disappears after they are removed, but there are also advantages, because along with the growth of OT, there is an increase in other characteristics that remain forever.

5. In the protection of a city or a castle (drenched in pearls), your knowledge will increase by a factor equal to three, and this is a very serious help. And do not forget to additionally "sour" for courage :)

6. You can again negotiate with the players and use the "tank" method, which is well described in "Sharks-2" on the forum :) In a nutshell, the strategy is as follows: a powerful and well-equipped fighter (tank) is taken, into an ambush of a village-village and zero clones with brass knuckles are thrown there, but with 100% health. Again, a gang of minimally developed clones is sent to the ambush.

Result: both sides are pumped, better with brass knuckles. All blows are taken by the "tank", the rest are stuffing themselves with an OT.

7. No one has canceled protection from the remains of a dragon and anti-Webman machine guns - expensive, but if you want it effectively and for the future, then this way of "stuffing" the OT makes sense.

8. Communication with a mentor. If the mentor does not describe in detail how to succeed in robberies, then you need to look for like-minded people who are more experienced, ready to help with advice or contact the help chat or the forum, they throw in a lot of options from which you can choose something for yourself.

On this, perhaps everything. Do not wait, settle in the "golden league" in a couple of years and start instilling fear in both robbers and security guards.

Or maybe you should get to know your prince better and conclude a mutually beneficial alliance with him? A team game will allow you not only to rob while guarding, but also to develop while earning.

PS If readers have questions about some points in the article, it will be very cool if they ask them in the comments.